For bookings of concerts and art shows please contact Dianne at Bobby Goldsboro Productions at the email address below:

Bobby will not be performing in 2021. He will be concentrating on his art commissions.

Bobby will be auctioning off an 18"H x 24"W Framed print of his beautiful wolf painting, "Tundra." All proceeds go to help rescued animals in the community.

Bobby's framed print of "Tundra" sold for $5,000 at the Fur Ball, a new record for the silent auction!

January 2018    The Ray Stevens CabaRay Showroom in Nashville, TN has opened. Stevens commissioned Bobby to create an 8 foot x 4 foot oil painting of Ray on stage. The painting, (pictured below) now hangs in the main entrance of the state-of-the-art CabaRay Showroom. Bobby was at the recent VIP Special Grand Opening of the theater and says there's nothing like it in Nashville! Get your tickets for the Ray Stevens Show and see Bobby's incredible oil painting, "Ray Stevens...Way Out There!" 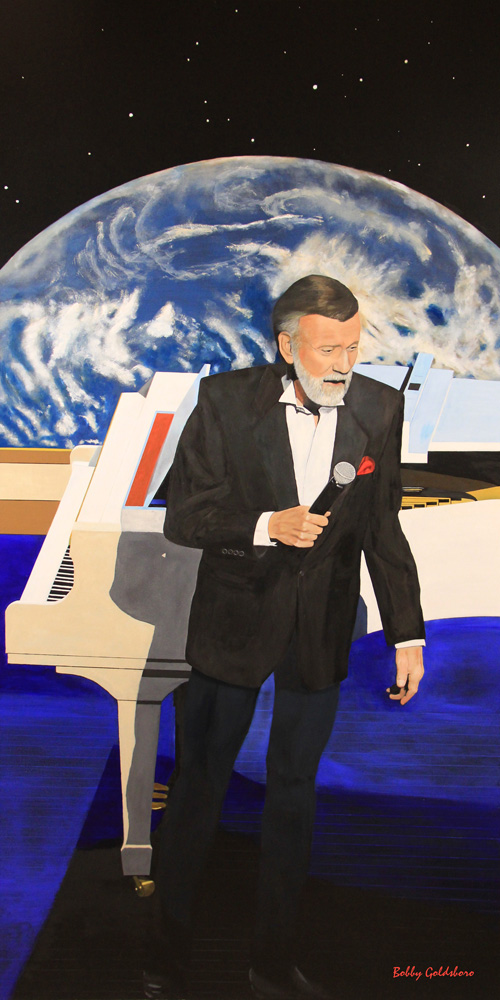 "Reborn," (pictured below) an oil painting by Bobby Goldsboro sold at the Celebrity Martini Glass Auction for $25,000 February 8th in Naples, Florida. The painting was commissioned by Brenda Melton, founder of the CMGA. The event raised more than $500,000 for PAWS, which provides service dogs for veterans who have lost limbs in battle. Bobby explained his inspiration behind the painting:

Bobby Goldsboro's giclee print of "Mutual Admiration" (pictured below) sold for $5,000 at the annual event. Bobby's good friend, Hall of Fame catcher, Johnny Bench, hosted the affair which raised over $500,000!

The beautiful martini glass that Bobby designed and painted (below) brought $14,000 at this annual event that raised money for P.A.W.S., an organization that provides service dogs for wounded veterans. Bobby presented a dog to wounded veteran, Joe Kashnow.

The giclee print below also brought $5,000 at the auction!